Our cheeks are clinched with excitement over the upcoming fall TV season! We intended to post a super mega containseggs sneak peek at the upcoming season, with reviews based entirely on the promotional print ads for the shows, but we never quite got around to finishing! Entertainment reporting makes us want to exclaim!!!

So, here’s one sneak preview, for a show that already debuted tonight. We didn’t watch it, but we bet we’re pretty accurate. 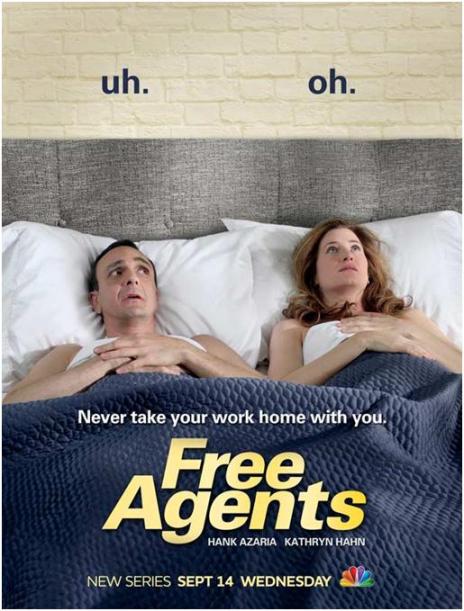 Even Apu Hates This Show

If this promotional ad is any indication, this show will suck as aggressively as his last sitcom, if you can Imagine That. We love Hank Azaria for The Simpsons alone, and we think he’s a gifted live-action actor as well. Huff entertained us during its brief two-year run on Showtime, and Azaria impressed among a terrific cast that included Blythe Danner and Oliver Platt. (Platt’s turn as a spectacularly unraveling, drug-charged lawyer ranks as one of our favorite performances in TV or movies over the past several years.)

But Free Agents looks like forgettable formulaic schedule-filling crap. Uh oh, indeed. Let me guess: Two professional colleagues drink too much at a work function and end up sleeping together. Hilarity evades!

Even the look on Azaria’s face here seems less to communicate, “What awkward professional situation have I gotten myself into with a coworker?” and more to say, “I hope Helen Hunt doesn’t ridicule this show at parties.”