Sometimes moderately funny things become impossibly hilarious to me. So is the case with Ab Lincoln, an errant typographical moniker assigned to our 16th president by a colleague in a recent email. The author intended to inspire and energize the corporate troops with a quote from Abe Lincoln, but the clumsy motivational metaphor fell flat, in no small part because he attributed the day’s wisdom to “Ab” Lincoln.

Typos are funny in a way similar to videos of people obliviously stumbling into fountains at the mall while texting. It’s the kind of unintentional, non-malicious, disproportionately embarrassing act that we quietly laugh at when others do it and simmer in frustrated shame when we do it ourselves.

And Abe Lincoln is our most consistently comedic historical figure (although I rally for Rasputin). Saturday Night Live recognized this years ago when Abe Lincoln showed up to call Tom Hanks “an incredible pussy” during the opening monologue. And Conan O’Brien (who likely wrote the Hanks skit back in his SNL days) has long appreciated the comedy versatility of Abe.

So, yes, “Ab” Lincoln made me laugh. It conjured images of Honest Ab, with a glistening washboard torso usually only seen in magazine shoots of Twilight stars and favorable imaginations of a super-lightweight division boxing champion Jesus Christ. And what would a ripped cabin builder and super-motivational orator do? Open Ab Lincoln’s Fitness Emporium, that’s what! Fortunately, I work with a talented designer who helped realize this vision. 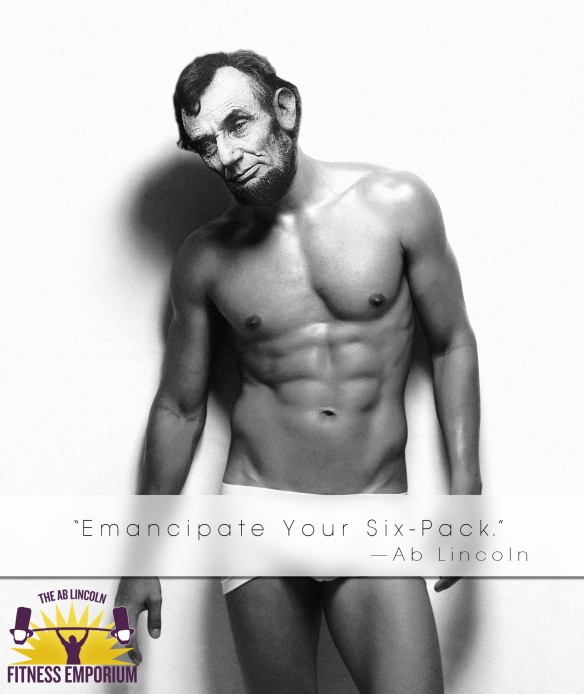 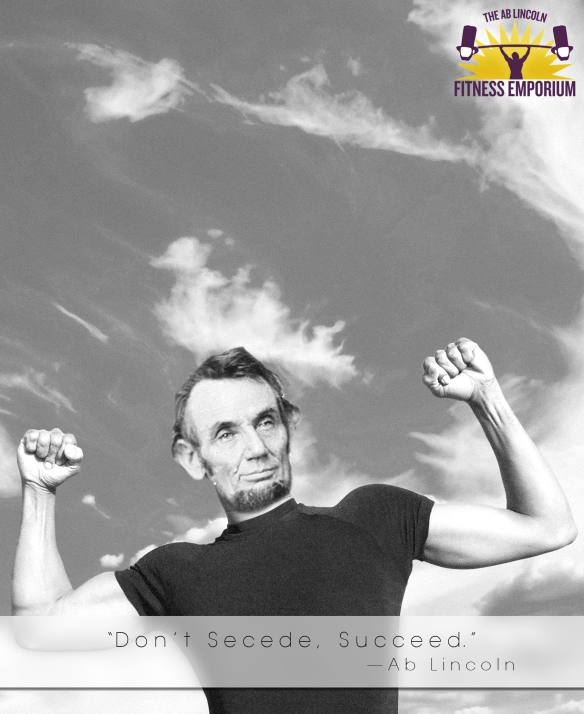 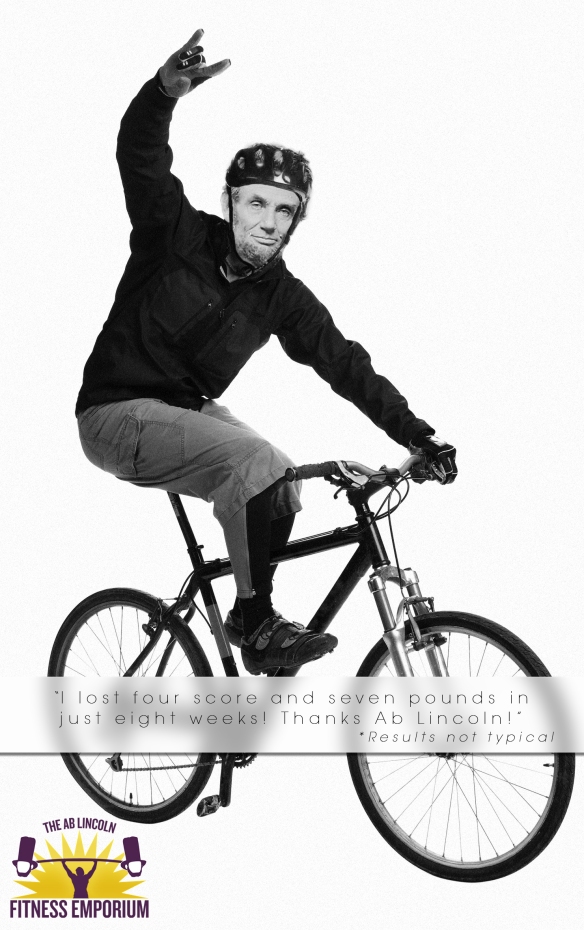 We all know that Abraham Nelson Lincoln was the 16th president of the United States, guiding our country through the Civil War and emancipating the slaves following the Cobbler Rebellion at Antietam. We see Abe’s face on shiny copper pennies, five-dollar bills and NBA mega-star DeShawn Stevenson’s Adam’s apple! But there are many wild, fascinating things about Abe “Abraham” Lincoln that your history books never told you! Here are five little-known fun facts about our most brown-haired president: 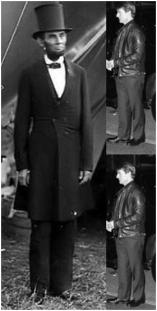 Abe stored his thetans in his stovepipe hat!

Can you imagine how tall Abe was? Consider Nicolas Cage, the most accomplished modern film star currently riding in a taxicab. Cage is sitting down, so it’s tough to compare his height, but actor Tom Cruise often stands up, unbeknownst to those around him. Abraham Lincoln, when standing in direct sunlight, could have rested his chin on the head of a Tom Cruise double stack! (Cruise’s special Hollywood shoes distort the effect in this photo comparison, but it’s documented to be true!) 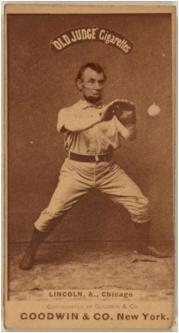 Abe's glove was made from a much larger person's hand!

Few people realize that Abe Lincoln was an early pioneer of America’s pastime, coddlescotch. But after losing teeth in three separate coddlescotch scrums, Abe switched to baseball, and he was part of the earliest “barnstorming” teams that traveled in the Northeast and Midwest. Abe pitched and played second base for the Chicago Turtle Boggers in the mid-1840s, during breaks between the county court sessions in which he served as a prairie lawyer.

As a pitcher, ole’ “Puddin’ Head” Abe had a special pitch his teammates called the “fastball.” He used to delight fans with his pregame antics, particularly when he would fill his pants with hotdogs and run (sometimes backwards!) across the outfield warning track. But once the whistle blew, Abe was known as a fierce, relentless competitor on the field. Baseball’s early governing body, following the just-established “Knickerbocker Rules,” dismissed Abe from the league in 1846 after he beat an umpire within an inch of his life with his bare knuckles! Abe later said he drew on that competitive experience in his famed debates with Mike Douglas.

Although he could be quite serious when speaking publicly, tending to the business of the country, or making candles, Abe had quite a reputation for his sharp (and sometimes ribald) sense of humor. Many of his jokes and funny sayings have been recorded, including this one: 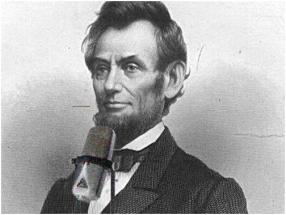 “A man walked into a café. The chalkboard affixed to the wall listed the specials:

The man cocked a rascally brow and set his gaze upon the delightfully fair young lady behind the counter.

‘Hello, madam. I must know, are you the lady who gives the hand jobs?’

She smiled sheepishly and lowered her eyes in a coy manner.

‘Well, then, young lass,’ our man replied, in voice the men about him could hear. ‘Please wash your fucking hands, I wish to order a Western sandwich.'” 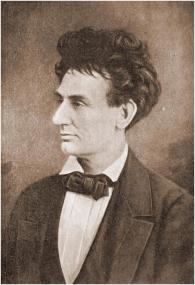 Boy, these rebels are makin' me thirsty.

Few people know that before his service as a captain in the Illinois Militia during the Black Hawk War in the early 1830s, an impressionable, enthusiastically youthful Abe traveled to New York City and spent nearly year living the bohemian life as a thespian. Abe took to the stage immediately (which many people find ironic, given that his assassin John Wilkes Booth was a failed actor who shot Abe in cold blood in the alley behind the Uno’s Theater in Naperville, Illinois).

Abe worked jobs in stage production and landed several bit parts as an actor before landing his biggest role in the long-running topical play “The Sorenson Chronicles,” which followed the exploits of city-dwelling dandy Jericho Sorenson and his madcap, ragamuffin cohorts. Abe stoked the guffaws as Constantine Krieger, Sorenson’s offbeat neighbor who was always cooking up zany schemes and provoking the audience into howls with his gangly, fearless physical comedy.

“The Sorenson Chronicles” was groundbreaking at the time for presenting evolving, complex narratives that often carried across multiple performances. One of the most famous and popular story lines involved the main players engaged in a contest (with wagers!) to see who could go the longest without emancipating. 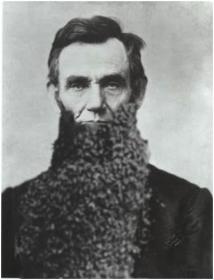 Looking closely? Eagle-eyed readers have noticed that this is not an actual photograph. Indeed, there are no known photographs of Abe with his beard of bees. However, we were able to take a photo of a free-floating bee beard, project it onto a sketch pad and trace it, and then have our staff artist sketch in Abe's likeness with charcoal. Doesn't technology just blow your mind sometimes!?

Most of us only know ole’ “Crunchbucket” Abe with his full beard. (Funner Fun Fact Within a Fun Fact: Abe learned and adopted the French word “beard” when negotiating the Louisiana Purchase with French-speaking Belgian delegates in Norway! It was also the first time he ever relaxed in a hammock!)

But Abe actually maintained a clean-cut mug until his early 20s. The legend, first documented in Poor Richard’s Almanac, says that a whiskerless Abe showed up at the Indiana World’s Fair in 1831 to ride the donkeys and see the Eiffel Tower when fate—in the form of renowned Midwestern beekeeper Byron McElroy—intervened. McElroy held audiences captive with his bee taming shows, and in one performance he coaxed a reluctant Abe on stage for his signature “Let Me Bee Your Beard” trick. Within just a couple of minutes, Abe was wearing a heavy chin curtain of queen-seeking yellow-backs! The aggressive venomous stings so inflamed and disfigured his face that he kept it covered with facial hair in shame and humiliation for the remainder of his life!