Three months ago I bought tickets to see Mike Birbiglia perform his Thank God for Jokes show at the Buckhead Theater in Atlanta. His show was this past Friday night, March 28. Three months is a long time for me to keep track of anything, so when I got a reminder email earlier this week, it was like finding a $20 in my pocket while doing laundry. So I was extra excited winding down Friday at the office and looking forward to the show.

And Birbiglia delivered. It’s the first time I’ve seen him live, and he was clearly in a good mood, going off-script several times to goof around with the crowd, the ushers and the erratic spotlight guy. He was crisp and energetic, keeping a lively pace for what ended up being an 80-minute set.

He also got bonus laughs recounting his cameo from the previous night on Late Night With Seth Meyers. A few weeks ago on Late Night, Birbiglia had shared a funny anecdote from years back about The Beek being unamused at the prospect of being Birbiglia’s doppelganger. On Thursday night’s show, Birbiglia made a surprise cameo to acknowledge an apology from The Beek, who had originally claimed the incident never happened. (Van Der Beek was a surprisingly likable guest for his full segment. Nice to see a celebrity who can both recognize and mock the nature of his charmed and fragile celebrity.)

In his live show Friday night, Birbiglia was clearly still amused by the previous night’s Meyers appearance. And when you watch the Late Night clip below, it completely mirrors Birbiglia’s recollection of it on stage Friday. He loved the idea of flying in to appear on Late Night and prepared jokes just for the bit, then was overwhelmed by the crowd reaction and his own realization that he looks nothing at all like James Van Der Beek.

Birbiglia’s entire set Friday night was terrific. He gained steady momentum, stacking up early chuckles and building to close with a series of routines that the had the crowd howling and leaving happy. He killed with a bit about running onstage and inadvertently bellowing “fuck” to an audience of Muppet fans, then immediately running back offstage because he forgot to bring out his trademark stool.

Late in the show, he shared a magnificent story about hosting the 2012 Gotham Independent Film Awards in New York. Director David O. Russell (The Fighter, I Heart Huckabees, American Hustle), was there to receive a career achievement award. Birbiglia hosted the awards and opened with a monologue that included a verbatim recitation of Russell’s brutal verbal assault on Lily Tomlin on the set of I Heart Huckabees. Enjoy it here (his tirade starts at 1:08):

(In an aside, Lily Tomlin starred in the 1978 movie Moment By Moment as a middle-aged divorcee exploring an exciting and dangerous romance with a young, Stetson-soaked drifter played by John Travolta. I imagine in real life their genitals would repel like two north magnets.) 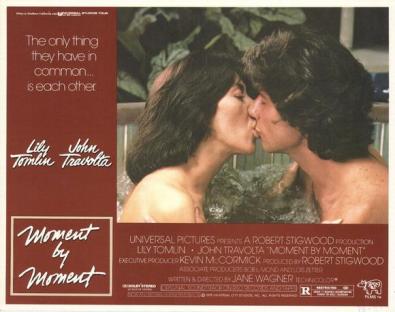 Let me take this moment to say “NOOOOOOOOOOOO!”

Birbiglia’s point was to highlight the absurd reality of sometimes finding big laughs at the expense of people in the audience. He said the joke brought the room down, but almost took the award ceremony with it. Russell apparently got up from his seat and walked out, threatening backstage not to accept the award. In the end, Russell accepted the award and was gracious later responding to questions about Birbiglia’s joke. Birbiglia cited this line from a review in Variety the next day:

“Before any winners were announced at Monday’s 22nd edition of the Gotham Awards, one thing became clear: Host Mike Birbiglia will not be in David O. Russell’s next picture.”

My clinical breakdown of Bribiglia’s Russell routine takes all the funny right out of it, but I shared it because it highlights something I like best about Birbiglia. His introspection about comedy sets his work apart. For example, he didn’t share the Russell anecdote simply as a self-serving tale of how he knocked a big-time director down a notch. In fact, Birbiglia clearly reveres Russell’s work as a director. More importantly for his act, he also clearly reveres Russell’s searing, vulgar on-set assault on Tomlin. And he’s right, it’s painfully hilarious to hear a major director come unhinged in a shouting “I’m trying to help you cunt” rant. Birbiglia loves it so much he personally transcribed it from the video clip for his stand up, and when he reads it aloud it creates a riveting poetry to the words.

Birbiglia’s reflection about how audiences and individuals react differently to comedy adds depth to his material. I’m paraphrasing Birbiglia from recollection: “Russell is being honored by a roomful of his peers for his lifetime achievement as a director, and some guy he’s never heard of gets up on stage and recites verbatim Russell’s most regrettable moment of all time. And everyone in the room laughs.” He’s fascinated with how comedy works or fails, and he weaves that perspective into some of his most relentlessly funny material. It creates a personal connection with his audience, without ever drifting into sappiness. Because even as he makes you think about human fragility and insecurity, he still makes you laugh really fucking hard.

Venue review: The Buckhead Theater sucks shit for seeing a comedy show. It’s especially bad if you’re lucky enough to score “view obstructed’ seats in the back of the orchestra level. I expect “view obstructed” to mean perhaps the balcony above enters the top of my line of vision, or a sound booth limits vision to the right or left of the stage. At Buckhead Theater, it means you’re sitting in one of 60 or so temporary seats with a giant fucking beam that holds up the balcony level directly dead center in your line of sight to the stage. Such that you will periodically see Birbiglia when he wanders stage left or right, but you’ll have to lean two feet one way or the other to see him when he retreats (as he does frequently) to the stool set at center stage. I’m astounded Buckhead Theater would sell those seats at all. And, at least from where we sat, the sound was awful, with a slight echo delay that rendered Birbiglia inaudible at times. Zero stars.