Earlier this evening I was sitting outside on the porch, finishing up some work on the laptop. I’d used spray to protect against mosquitoes, but apparently I had inadvertently grabbed the can of “On.” These mosquitoes found it DEETlicious.

Maybe if I use Deep Woods ON! I can attract a tick.

Mosquitoes have revered and feasted on my blood since I was young. I was lanky and bone skinny as a kid, with radiant pale skin that drew bloodthirsty swarms like a beacon at twilight. There’s a family photo and me and my brothers by the pool when I was about 11. I was all ribs and elbows, dough white with 30 mosquito bites that I’d frenziedly scratched into enormous raised welts all over my jangly, hunger-telethon-boy body. I’m still astounded the neighbors never called DFACS.

For my current mosquito problems, a friend suggested citronella candles. I’m convinced southern mosquitoes sing songs and cook s’mores in the flames of these candles. Mosquitoes mock citronella, drinking shots of the wax as it melts.

Other recent invading warriors include a giant daddy long legs (now known as LL Diddy G) that parked in my bathroom sink the other day. I grabbed as much as I could carry or stuff in my pants and moved out immediately.

Yet upon my return to safe quarter, what was to greet me but this beast:

Actually, the other end is my ass

This creature is known as the house centipede, because it is a terrifying “centipede” that comes into your “house.” I have observed top speeds of 74 MPH, unaided by wind or elevation.

So live at your own peril in the southern summertime, and be on your guard. Unless you choose to delight the insect kingdom with the kingdom of God, as suggested in this bizarre testimony for competitive personal Jesus-infusion that crops up in my Facebook feed occasionally:

I respect all beliefs, but didn’t Tabasco do this commercial better several years back?

Last Thursday, after an hour of people exhaling words into the air without imparting any information, Erin Burnett got reflective on her nightly CNN comedy show. As the evening’s edition of OutFront wound down, she essentially conceded that they haven’t yet reported one fucking breath of news about the fate of Malaysian Air Flight 370.

She somberly noted that the news first broke two weeks ago “during this hour,” assuming some relevance by proxy and grim timing. Then she kicked off a 90-second retrospective of CNN’s shameful, news-free coverage of the tragedy.

It’s inadvertently the best retrospective of CNN’s embarrassing Missing Plane coverage and its ineptness as a news organization.

This bloated review of the new Beck album by Tom Breihan makes me hate the album, the reviewer, Stereogum, music criticism in general, and almost everyone on earth. Let’s start at the end:

“But as an exercise of pure craft and musical cohesion, Morning Phase is a deeply impressive album, a road-trip record for the ages. An album like this is a good reason to invest in better speakers. If you’ve got a decent system in your house, it’s an ideal soundtrack to mimosa consumption, or to watching the hills roll by like centuries.”

Thus concludes 999 words of turgid muck about Beck’s new album. To be fair, Breihan didn’t invent the “hills roll by like centuries” line. It’s a Beck lyric that he’d just made fun of. Yet he closes with the line to let us know that he really, really gets Beck, and the rest of us listening on our inferior home radio-cassette combos played through old Yuban coffee cans do not.

And given that my speakers aren’t so good, maybe my read-‘um-up skills are faulty too. But I’m pretty sure Breihan really likes Beck’s new album, based on initial interpretations of the following statements:

Still, these observations leave us with some questions. Does Beck perform “music songs” on this album? If so, are they good? Should we listen to them on our music devices? Can we drink a single beer and still enjoy them? Are there certain models of cars that we are not allowed to hear the music in?

And then there’s this:

“Stylistically, it’s like Beck imagined the exact midpoint between the depressive inward orchestral folk of Bryter Later-era Nick Drake and the stoned but ambitious studio-pro trickery of peak-era Harry Nilsson. There’s a lot of room for play between those two poles, and Beck makes plenty of use of it.”

Hmm, my stereo cans are confused. Did Beck master the exact midpoint between these two pretentiously contrived musical markers? Or did he frolic in the vast space between these two arbitrarily related artistic mileposts? There are stoned but ambitious people who will never make sense of it all.

Thankfully, though, it reminded me of this hilarious skewering of Pitchfork’s feverish, indulgent music reviews by a wounded David Cross several years ago. Published on Pitchfork, no less. It is a bitter, brilliant satirical gem.

And our friend Davin shared this terrific Portlandia clip that winds us all down to the logical end of Pitchfork, Stereogum and their mutations:

The band No from Los Angeles performed on a repeat of Carson Daly’s show last night. Loved the songs, had a Nick Cave heart to them. But, the combover/combaround? Just say, you know, No. 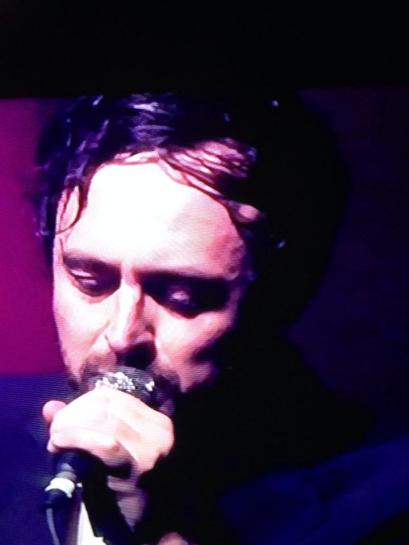 And now that I’ve taken a dickish, gratuitous jab at his hair gymnastics, let me at least have the decency of sharing some of the band’s music. Here is the full clip of the original interview with No on Last Call back in November, followed by an excellent live performance of the song “Leave the Door Wide Open”:

And here is a produced video for an older song, “Stay With Me.” The video is a bunch of preposterous nonsense, but the song ain’t bad at all.

I have had containseggs readers ask me what the “goddamned right I’ll be heard” line in the site masthead means. And by “readers” I mean one religious friend who was mildly offended that it says “goddamned.” The other 12 daily visitors move on and continue searching for egg recipes.

For sure, it’s not based on any religious hostility. I am agnostic, which means I’m an atheist but I’m just not a fucking asshole about it. Fundamentalist atheists are as annoying as vegans and Deepak Chopra.

Instead, like most important guidance in my life, the line comes from a Modest Mouse lyric:

“Well I’ll go to college and I’ll learn some big words
And I’ll talk real loud, goddamned right I’ll be heard
You’ll remember the guy who used all those big words he must’ve learned in college.”

I have long found this a perfect perspective on puffed up academic and intellectual self satisfaction. It occurred to me again the other day when I saw people on LinkedIn and Twitter sharing this and clamoring to be clever by proxy:

My immediate reaction to this was, “Oh, fuck off. Don’t you have a TED Talk to give somewhere?”

Sure, there’s merit to the notion that we communicate more directly and personally than ever. But that’s not new. Smart marketers and sellers in any business have always realized that people think and buy emotionally and personally above all else. It’s true if you’re a consumer buying shoes or a CEO signing off on a $10 million software purchase.

The guy unveiling “H2H” in the picture is Bryan Kramer. I didn’t know of him before seeing this. Looking him up, he’s a deservedly respected CEO of a company called purematter, which has an electric portfolio of content marketing for some big name clients.

And he’s a smart marketer, creating an early buzz for the “Human to Human’ concept that, alas, is also the name of his upcoming book. People are eager to associate with a big thinker’s Next Big Idea:

But “human 2 human” is an idea contrived solely for its own existence. It’s there to be talked about and fawned over, not to do or invent or solve something, nor to challenge us emotionally or artistically. It’s an intellectual fart that we celebrate as an achievement, ignoring its fleeting presence and pretending not to notice its staleness.

All of which reminds me of this outstanding cartoon by B. Kliban, an immaculate commentary on intellectual self satisfaction:

Kliban was most famous for drawings of cats that overshadowed his other brilliant, subversive and hilarious works. If you’re not familiar with Kliban, do yourself a favor and check out some of his collections.

I have offered “SNOW MY GOD! 2014” to my local news contacts free of charge. So far no station has adopted it as a winter storm theme. But someone will.

For locals, please be aware that this storm has the potential to be CATASTROPHIC. We know this because the National Weather Service said so as the storm approached. And now it is the only word local newscasters say. Brenda Wood on WXIA must’ve said “catastrophic” 31 times in the opening minute of the 11 o’clock news last night. It reminded me of this scene from The Aviator, when Leonardo DiCaprio portrays Howard Hughes in the early stages of descent into mental illness, obsessively repeating “show me all the blueprints.”

I do not make light of the storm’s potential. As an Atlanta native, I’ve seen firsthand for decades how bad we are at snow. Hell, last weekend Nashville got a half-inch of snow and traffic in Atlanta ground to a halt. (That did not actually happen.) Godspeed, hometown.